When I was growing up my family's right of passage, after elementary school, was flying to St. Louis (without a chaperone) to spend the summer with Grandma and Grandpa. As long as you finished elementary school with good grades, of course.

My Grandpa was a safety razor and Barbasol guy who liked to shave in the shower. And my first Barbasol experience coincided with my first shower at my grandparents' house that summer.

Grandma was always into fancy new things, and I thought that can of Barbasol was some new kind of fancy soap. So I picked up that can, squirted a great big blob into my hand, and lathered up -- all over, even behind my ears.

What did I know? I was 10 -- and a girl! I still remember how slick and rich that Barbasol shaving cream was, it's a miracle I didn't slip and break my neck.

Needless to say, I was the butt of many jokes that summer. Ok, you're right, that summer and years beyond.

The biggest lessons I learned were, always read the can first, and there's a difference between soap and cream.

If you're like most guys, your first shaving experience was with guidance from your father. Your young impressionable self knew that the way your dad shaved was the right way. And that was exactly how you should shave too.

If your dad was the busy, adventurous type, he most likely used a can of shaving cream. And your first lathering experiences came from a can, too.

But a lot has changed in the years since you first shaved those tender young whiskers from your face. And since then you have probably tried the other side of that ancient debate, cream or soap.

But ultimately, you have to choose. Are you going to use a bar of traditional soap and brush? Or do you choose cream because you don't have the time or energy to deal with soap and a brush?

Or maybe you'll choose both. Do the convenient quick shaves during the week. Then on the weekends when your pace is a bit slower, enjoy the experience of a brush and soap.

Whichever you choose, you should know that today's soaps, shaving creams, gels, and lotions are all manufactured under strict quality control and regulated by various federal agencies, including the FDA.

Even if you've always been a can guy, at some point -- especially with its recent resurgence of popularity -- you may have been convinced you to buy the brush and the soap. And admit it, that first time (or 10) was almost enough to send you back to the can.

The obvious difference between soap and cream is that soaps are firm, or hard when you compare them to the soft consistency of shaving creams. That means they'll generally require more water, and time, to build a lather. Then when you've finished shaving, there's the cleaning of the brush.

But traditional shaving aficionados consider shaving soaps to be the only way to get not only the best shave but the best shaving experience as well.

If you’re into scents, you’ll want to make sure your soap scent doesn’t clash with your aftershave or cologne. While we're talking scents and natural products, you’ll want a soap made with natural scents (essential oils) rather than chemicals.

If you've been paying attention, you already know the downside of soap is time. It takes more time to whip up a lather, brush it on and then clean the brush. If you’re a busy guy, you may have to wait for the weekend to savor that soap and brush experience.

But I bet if your shaving journey began with a brush and soap you were quicker to try the canned cream. Because there are times when it's either a quick shave or dealing with stubble.

Here's an interesting bit of information. Aerosol containers were first invented during World War II to deal with insects carrying malaria and other diseases. The patent for this "bug bomb" was released to American industry after the war.

The ingredients for most shaving creams are pretty standard. The differences in products lie in the quantities used and the choice of substitutes for the few variable ingredients.

Triethanolamine (TEA) is usually the third or fourth ingredient listed in shaving creams. Its primary use is to adjust the pH of the cream to match the pH of your skin more closely. TEA has been shown to be toxic in mice at extremely high concentrations and has been linked to irritation, contact dermatitis, and allergies.

But before you throw the baby out with the bathwater, be aware TEA is in most cosmetic and personal care products in small amounts.

While it takes less time to shave with cream, this is also one of the downsides of using cream. The quicker the shave, the less time for hair to plump up, making a smooth shave harder.

Another downside is the chemicals in shaving cream compared to natural shaving soaps.

Frank designed that first shaving formula to provide a comfortable shave for men with tough beards and sensitive skin, like his.

There seem to be discrepancies on how Barbasol got its name, but most believe it's a combination of the Latin for beard "Barba" and a shortened version of solution "sol." However it got its name, Barbasol shaving cream has helped slick the whiskers off a lot of faces.

In 1962, Pfizer purchased the Barbasol brand and then in 2001 Perio purchased the company from Pfizer. Perio quickly re-energized the brand by expanding product lines, developing new products, and renewing brand awareness through advertising.

Their efforts are working because today Barbasol shaving cream is sec​​ond only to Schick's Edge in sales of shaving cream in the US. Of everything Perio has done to re-energize Barbasol, their new rust-proof aluminum bottom has to be near the top of the list.

No more of those unavoidable rust rings. 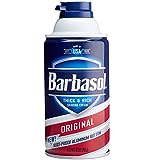 The ingredients in the aerosol can include water, stearic acid, triethanolamine, isobutane, Laureth-23, sodium lauryl sulfate, propane, and fragrance.

This Barbasol shaving cream review is an independent analysis of six comparable shaving creams available for today's consumer. In our review process, we compared the ingredients of each shaving cream as well as consumer comments and reviews.

We have no business or financial ties to any of the companies mentioned in this review.

The goal of this Barbasol shaving cream review is to provide you with sufficient factual, unbiased information so that you can make an informed and effortless decision on your next shaving cream purchase.

Before we take a look at the competition, this may be a good time to remind you that no matter how you shave, or what you shave with, if you want your blades to remain sharp, rinse your blades often.

And according to those in the know, an aftershave is necessary and has a purpose. Use aftershave to prevent infections from cuts, as well as an astringent to reduce skin irritation.

That aftershave will clear your pores of any bacteria that might have been on your razor. It also seals up your pores to prevent any additional dirt or bacteria from gathering on your skin.

Now let's check out the competition. 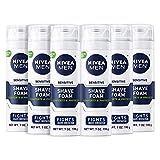 NIVEA Men's Sensitive Shaving Foam soothes and protects skin from shaving irritations, thanks to their Skin Guard Technology. And the dermatologically tested formulation, tested by men with sensitive skin, has no drying alcohol.

This sensitive formulation combines 18 ingredients plus fragrance to give you a close and comfortable shave. The main ingredients in this aerosol can are water, stearic acid, isobutane, triethanolamine, Laureth-23, and glycerin. 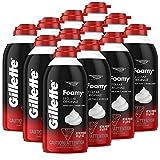 Gillette Foamy Regular shaving cream spreads easily and rinses clean. And its Comfort Glide formula and rich lather reduces friction, leaving you with a close shave and a smooth face.

It comes in an aerosol can, and its ingredients include water, stearic acid, triethanolamine, isobutane, Laureth-23, sodium lauryl sulfate, propane, fragrance, and BHT.

The very popular CREMO Original Shave Cream, with its unique, impossibly slick molecules, allows your razor to glide effortlessly over your skin.

One almond-sized squeeze from the tube of this concentrated formula will give you a close, comfortable shave.

The Italian made Proraso shaving cream with its nourishing botanical and natural oils, protects the skin, and helps the blade glide smoothly, reducing razor burn and rashes.

This cream, in a tube, contains 19 ingredients and fragrance. In addition to Eucalyptus oil, menthol, and glycerin, the main ingredients are water, stearic acid, coconut oil, potassium hydroxide, and lactic acid.

Marlowe.™ Men's Shaving Cream is a conditioning cream with shea butter and coconut oil to soothe while forming a barrier on your skin.

In this tube, Marlowe. has 23 ingredients, including fragrance. As well as shea butter and coconut oil, the main ingredients are water, myristic acid, potassium hydroxide, stearic acid, polysorbate 20, and willow bark extract.

In addition, Marlowe. has a "Do More Good" program. For every Marlowe. item purchased, they distribute soap to people at risk for hygiene-related illnesses in partnership with Clean the World.

Slap on the After Shave

In this Barbasol shaving cream review, we've discussed the differences between shaving creams and soaps. And we've learned a bit about Barbasol's history and looked at five of their competitors.

Not to mention, sharing my first Barbasol experience.

If you are wet shaving, remember to rinse your razor often to keep your blades sharp. And don't forget to pat on that aftershave, especially if shaving gives you a rash or acne.

The consensus is you will spend a total of 45 days of your life shaving. Whichever you choose, here's to making those 45 days smooth and free from razor burn and bumps.

So which kind of wet shaver are you, cream or soap? Let us know in the comments below, and let us know if you have used Barbasol shaving cream.